Join the Lane Tech community in formally dedicating the field at Lane Stadium in honor of Frederick Douglass “Fritz” Pollard, Class of 1912!

Fritz was the seventh of eight children in the Pollard family, the first Black family to settle in Rogers Park. Coached by his older brother Leslie, he pushed his 5-foot-9 stature to become a three-sport elite athlete at Lane Tech, excelling as a running back in football, shortstop in baseball, and all-around track and field standout.

A 1912 meet records Fritz taking first in hurdles, second in the half-mile and third in high jump, while winning “County” three times. His classmates compared him to Mercury, the fleet-footed messenger of the ancient gods. Pollard went on to play for Brown University where he was the first Black athlete to compete in the Rose Bowl and make the All-American team. In 1919, (the year Jackie Robinson was born), Pollard signed with the Akron Pros and led them to the first professional football championship in 1920 when he was one of the highest paid athletes in the country.

He was the first Black player-coach in the league, and the first head coach with the Hammond Pros in 1924. It would be 63 years before another Black head coach was hired by an NFL franchise.  When Black athletes were unceremoniously booted from the league, Pollard established all-Black barnstorming teams that played throughout the country.  He also founded the New York Independent News, a talent agency, a tax-consultancy and investment firm and a coal delivery company.

Pollard was the first Black alumnus to be inducted into the College Football Hall of Fame and was inducted into the NFL Hall of Fame posthumously in 2005.  The Fritz Pollard Alliance bears his name in honor of his personal achievements in spite of deep and overarching racism, and his promotion of Black professionals in his many business ventures.

Check back here for ticket information. 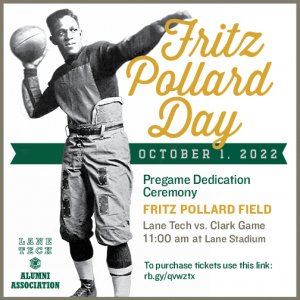 If you won’t be able to attend but would like to make a donation, click on the button below