As industrial education’s popularity continued to grow through the years, and Lane added many new courses to its curriculum, Principal Bogan recommended that the school’s name be changed in view of the fact that it didn’t reflect all of the courses offered. In 1909 the school became known as the Albert Grannis Lane Technical High School.

By 1915 the school was in full swing. The building was in almost constant use. Carpentry, cabinet making, and wood turning were offered to first year students. Sophomores were given extensive training in the fields of foundry, forge, welding, coremaking, and molding. Juniors worked in the most popular shop, the machine shop. It was equipped with 80 machines and 60 lathes cast and built at Lane.

Seniors were given the most advanced shop, the electric shop. There they built motors, generators, transformers, and other instruments. Other classes, such as art, classical architecture, drafting, and English were offered to develop students’ communication skills.

The print shop was the best equipped high school print shop in America. It was equipped with the newest and most advanced equipment of the time. Its jobs included the 4 page Lane Daily, the 56 page monthly Tech Prep, and the annual 200 page yearbook plus other out of school jobs.

In 1915, Jack T. Nelson, a student, felt it was time for Lane to have a school song. He wrote the words and music of “Go Lane Go,” making Lane one of only a handful of schools with an original school song.

In 1929 a comprehensive music program was established at Lane. Chicago Symphony Orchestra director Frederick Stock and Superintendent William Bogan worked together in designing the new curriculum.

By 1930 Lane had grown to a population of 7,000 students. To relieve the overcrowded conditions at the school, it was decided to build a new Lane Tech. Board of Education architect John C. Christensen began preparing plans for the world’s foremost high school complex.

On June 24, 1930 groundbreaking ceremonies took place at Western and Addison. The new building was a beautiful combination of function and art. Like the old Lane, it was designed to allow the teachers and pupils to work in a comfortable environment.

Lane’s new population required many new provisions. Classes were staged in three shifts, and commencement exercises were held at the International Amphitheater.

World War II provided Laneites with many opportunities to show the ideals of Albert G. Lane and his school. Many war drives were carried out by Lane students. These drives provided the war effort with four Red Cross ambulances, a B-17 Flying Fortress, and over 3 million dollars in war bonds.

Lane’s 50th anniversary in 1958 brought a very important change to the school. America, fearing the Soviet space supremacy, became preoccupied with establishing a sound space program. To aid in the education of scientists and engineers, Lane assumed a closed admission policy. The school dropped its remedial courses and took only the students that would make the greatest contributions to American science.

The year 1971 brought the most noticeable change in Lane’s history. The Board of Education approved Superintendent James Redmond’s recommendation to admit girls to Lane Tech. He cited a drop in enrollment and the lack of a technical school that admits girls, as reasons for the change. The school was in turmoil after this decision. Fifteen hundred Lane boys protested at the Board of Education. The general fear was that the school’s quality would drop and within a few years Lane would be just another high school. Actually, the school’s overall academic quality improved with the addition of girls.

Lane holds deeply to traditions established 90 years ago. Maintaining its high goals and ideals, Lane retains the majority of all athletic championships, many Illinois High School Association titles, and has a college attendance rate of 95%. Its music program has provided the Chicago Symphony Orchestra with many players.

Lane Technical High School’s performance in the last 90 years has surely proven the honor in proclaiming “I am a Laneite.”

Albert Grannis Lane was born to Amanda and Josiah Lane on March 15, 1841. Soon after his birth on Gale Farm in Galewood, Illinois, the family moved to a cottage at Van Buren and State Streets in Chicago. As a boy, Albert ventured west on the open prairie as a herdsman. He quickly developed a sturdy, independent character. Albert’s friendliness often alarmed his mother, especially when he spoke with wandering Indians. Josiah, Albert’s father, was a carpenter. As the family grew, he had difficulty supporting them. Albert, at age seven, began selling newspapers and by age nine was supporting himself. However, he never allowed working to affect his school work. After graduating from Scammon Grade School, he entered Chicago High School on its first day of existence.

When Albert was 17, he and a friend decided, just for fun, to take the City Teacher’s Examination. His passing of the test changed the course of his life and has had far-reaching effects on our own lives as well. 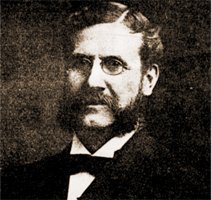 The Franklin School, which once stood at Sedgwick and Division, had a problem. Some boisterous students insisted on driving many of their teachers out of the school and finally, bodily threw their principal into a snowdrift. These actions so discouraged applicants for teaching positions, that no one could be found to replace the principal. The Board of Education asked Albert Lane to take the job. He had not graduated from high school, but he was honest, intelligent, and muscular, and appeared to be able to handle the task asked of him.

After ten years as Franklin’s principal, he was asked to serve as Cook County Superintendent of Schools. For 19 years he faithfully served the county by producing schools that reached a degree of practical efficiency not excelled by any county in the state.

During his term as superintendent, Albert Lane was faced with a grave problem. He deposited the school funds in the Franklin Bank, but the bank failed, and the school lost $33,000. While under no legal obligation to replace the funds, Lane assumed the debt. He sold everything that he owned to make up the debt. Nineteen years later, finally finishing his self-imposed task, he had returned $45,000 to the school fund, the principal plus interest.

In 1891 Albert Lane was elected to the revered position of Chicago Superintendent of Schools. During his entire career, he was aggressively active toward the introduction of manual training into the Public Schools. Lane used to lean back in his chair and say, “It must come. We must have a manual training school.”

He lived to see his dream in Crane High School. But, Albert Grannis Lane passed away on August 22, 1906 with still many more dreams unfulfilled. At his death, it was said of him, “Chicago has lost its best citizen.”

Albert G. Lane’s biography and the history of Lane were condensed from Down Memory Lane, 1983 with the permission of the publisher, Lane Tech Graphic Arts Department. The information was edited to reflect changes in dates and statistical information.